Area Games give communities an opportunity to bond, grow
May 4, 2011 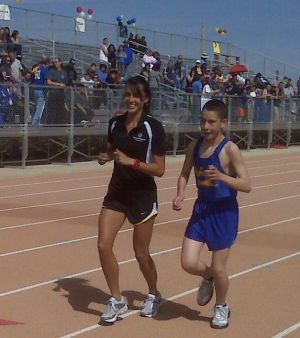 Athletes representing numerous delegations from Santa Fe to Las Vegas arrived sporting shirts and signs the honored the town from which they came.  Local program newbie, Penasco, made the most of their SONM debut, arriving in matching uniforms and with many supporters.

“The importance of Area Games is that it gives us all the opportunity to spend time getting to know our other athletes and families from neighboring towns,” said SO Santa Fe Local Program Coordinator Donna Lopez-Rios. “It’s a more intimate setting, which helps prepare us for when we come down for the State Games.  Once there, we’re not just rooting for our own delegation anymore.  We’re rooting for every athlete who represents Area 2.”

Underneath early morning blue skies and sunshine, volunteers worked fast to set up and organize themselves for what would bring a series of nail-biting races and joyous celebrations.

The Games went off without a hitch, as the Area 2 athletes competed in Track and Field and Bocce. The Law Enforcement Torch Run was also represented as local officers were on hand to award athletes as they completed their races.

Aside from competition, one of the main highlights of the day was the announcement of the Area 2 Athlete of the Year.  Athlete Chris Valerio from the Santa Fe delegation received the honor amid plenty of hoots and hollering from his teammates and fellow Area 2 fans.

“I was so proud of Chris when he won that award,” said Lopez-Rios. “We have so many wonderful athletes that deserve Area 2 Athlete of the Year that I’m sure it was a tough decision to make.”